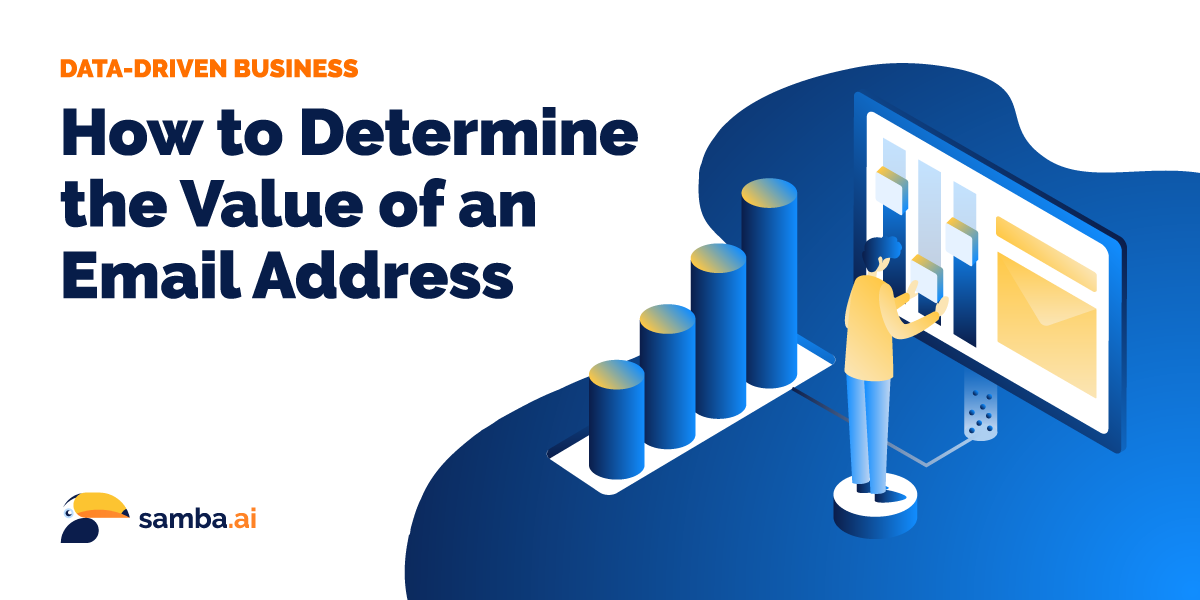 How to Determine the Value of your Email Addresses

Since Ray Tomlinson brought the first email address to life over 45 years ago, digital communication technology has grown leaps and bounds and the technological finesse of the average person has grown along with it. Despite those advancements, the digital dinosaur that is email is still one of the most effective means of connecting with and sell to your customers and generating a massive return on your investment.

Spend a few minutes conducting a Google search on “email marketing statistics” and you’ll quickly discover objective fact after objective fact of how versatile and potent email marketing truly is. It’s that potential that makes email databases such an incredibly valuable part of any business’s marketing toolbox and filling up and maintaining that toolbox such an important responsibility.

Going a step further, understanding the actual value of an email address, and the subsequent means of doing so, helps you better fuel your email acquisition efforts, budget more effectively, create viable strategies, and quantify your marketing campaigns.

But how do you go about doing so? How do you attribute a value to an email address? To start, you have to dig into your typical email campaign statistics, which includes:

Please note: Only consider those subscribers that you regularly target.

Armed with all of that data, you can now determine the true value of your email addresses. Put your mathematician hats on because things are about to get interesting.‍

Step 1: Determine the gross profit contribution of each sent email

When you get down to it, the money you make on a marketing email is generally based on how often those subscribers (recipients) convert and the overall value you get when they do so. With that in mind, we can calculate profit contribution as such:

Next, you need to determine the longevity or churn of your customer in order to get an idea of how many campaigns they’ll be exposed to, on average, before they unsubscribe. The model of the unsubscribe process can be created as follows:

For example, if your original number of subscribers is 100,000 and the unsubscribe rate is 10%, after two email campaigns you'll have only the following subscribers left:

After N campaigns, you’ve sent the following amount of emails:

which can be simplified using the sum of a geometric sequence [3]:

Now, let’s consider a more substantial period in which we’re sending emails (perhaps upwards of a few hundred campaigns) and analyze the customers' unsubscribe process. Using the approximation of a geometric series [4] for large N and 0 %<U<100 %, the number of sent newsletters can be computed as follows:

Thus, we get an average subscriber lifespan as the total number of sent newsletters divided by the number of original subscribers:

For example, if your unsubscribe rate [U] is 10%, your subscriber’s lifespan is:

Finally, we can determine the expected gross profit per email address (i.e., the lifetime value of a single email subscriber) by multiplying the previously computed values:

Please note: We also could derive the same formula modeling the unsubscribe process by geometric distribution ([5]) with success probability equal to the unsubscribe rate as follows:

where X ~ Geo(U) is a random variable describing the number of trials until the recipient unsubscribes. A subscriber’s lifespan is then defined as the expected value of: ‍

In an effort to help you get started, we’ve prepared a ready-to-use sheet that you can use for your calculations.‍

Here’s an example of our computational process in action. Let’s say you have 100,000 subscribers with an average order value of $80 and they generate a profit margin of 30%, an open rate of 15%, a click-through rate of 10%, a conversion rate of 5%, and an unsubscribe rate of 0.1%.

When you run the numbers, you end up with a subscriber value of $18, which means your email/subscriber list is worth $1,800,000. Now that’s a hefty toolbox.