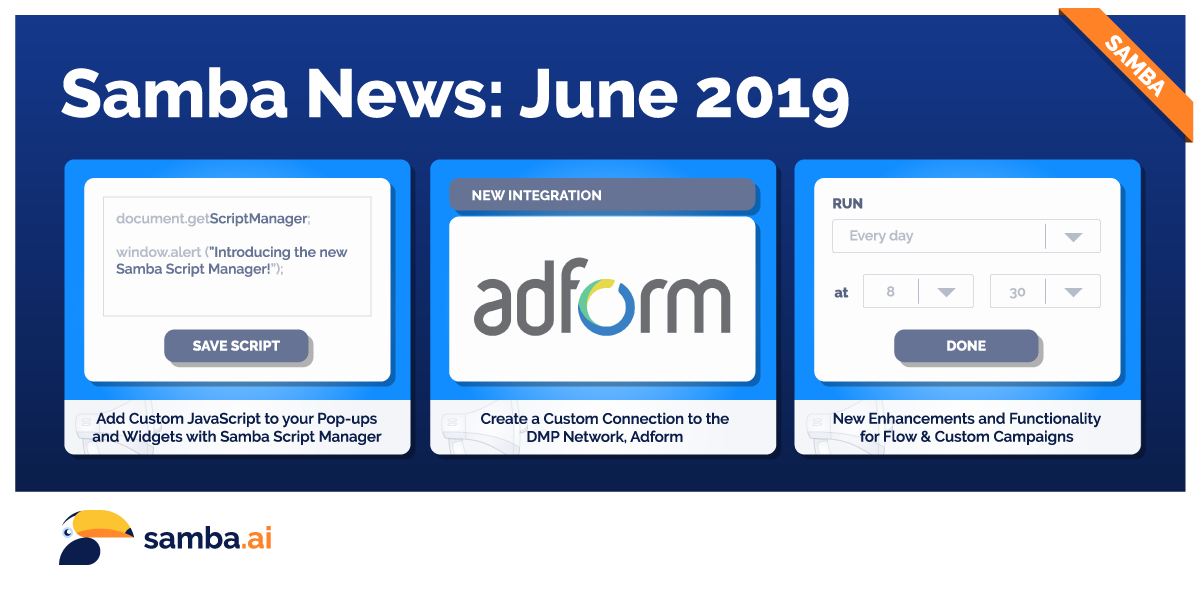 As June comes to an end, we’re happy to finally take the veil off some new, innovative Samba features that we’ve been hard at work on for the last 30 days. As you’ll see below, our primary focus was both on extending and improving existing features, while refining the design and functionality of Samba. Our showcase addition, the Script Manager, has us truly excited for what will be possible with Samba in the future.

Ideal for our larger-sized Samba Enterprise clients, we now offer the option to create a custom connection to the DMP network, Adform. By doing so, you can create retargeting campaigns that target customers even when they’re on websites other than your own.

Samba accomplishes this by sending select cookies to the DMP network to detect users as they browse the Internet wherever the Adform network is available.

The biggest news of the month is the addition of the Samba Script Manager for our Samba Enterprise users, which works very similarly to Google Tag manager.

With it, you’ll be able to add and test custom Javascript scripts directly in Samba that allow for various enhanced behaviors, designs, and features associated with your product widgets and pop-up windows. Best of all, since the Script Manager works off of the same Samba script used for your initial integration, you don't have to change any code on your website.

To show you how simple it is, we’ve put together a custom script that triggers an exit-intent pop-up with a basic design. You can find the code in our documentation and read more about how to set it up in our related blog article.

The script itself works quite simply - as soon as the user is about to leave the site, indicated by their mouse cursor moving above the top edge of the browser window, an exit pop-up window will appear. With that, you can make a last-ditch effort to get them to convert, offering perhaps a discount, free shipping, etc.

But the current Script Manager is just in its infancy and we plan to gradually develop it further, expanding its functionality and making it more versatile. Already in the next quarter, we'll expand the Script Manager with a data layer so you can use all your data from Samba. Then, more advanced innovations will follow.

As part of setting up a Flow Campaign, whether during initial setup or afterwards from the campaign settings, users can now configure the start time more precisely. While it was previously possible to only select the month, week, day of the week, and hour, now you can set the minute of the hour as well, which gives you even more precise timing when it comes to executing campaign flows.

To start, we unified the Samba interface and made it more user-friendly across the board. For example, in Flow Campaigns, there’s now a new pop-up window that will be displayed when you attempt to exit your campaign flow without saving, which will give you a clear message and the ability to either cancel or discard any changes.

Oh, and a final example, you can now see the results of your Flow Campaigns in the overall statistics dashboard.

As we gradually upgrade Samba with a more modern look and feel (we hope you’ve noticed), we’re happy to launch a revamped navigation menu complete with user-friendly functionality and responsiveness.

As you can see in the image below, the main navigation menu now behaves dynamically, opening automatically when the mouse hovers over it. At the same time, we’ve changed the color scheme to better fit with our new branding.

These enhancements also made their way to the top navigation menu, where it was simplified and redesigned, including a more user-friendly extra step for logging out. We hope this will help rectify many of those unintended logouts where users were accidentally clicking the “Log out” button when they really wanted to go to their settings.

The editor in Samba Enterprise has a few minor improvements that make it easier to work with, including the option of not creating a name before starting with a new template, a new “Save as new” option, and some other minor changes to the editor menu.

In addition to the items above, we fixed a variety of bugs and added some new minor optimizations to improve the usability of Samba.