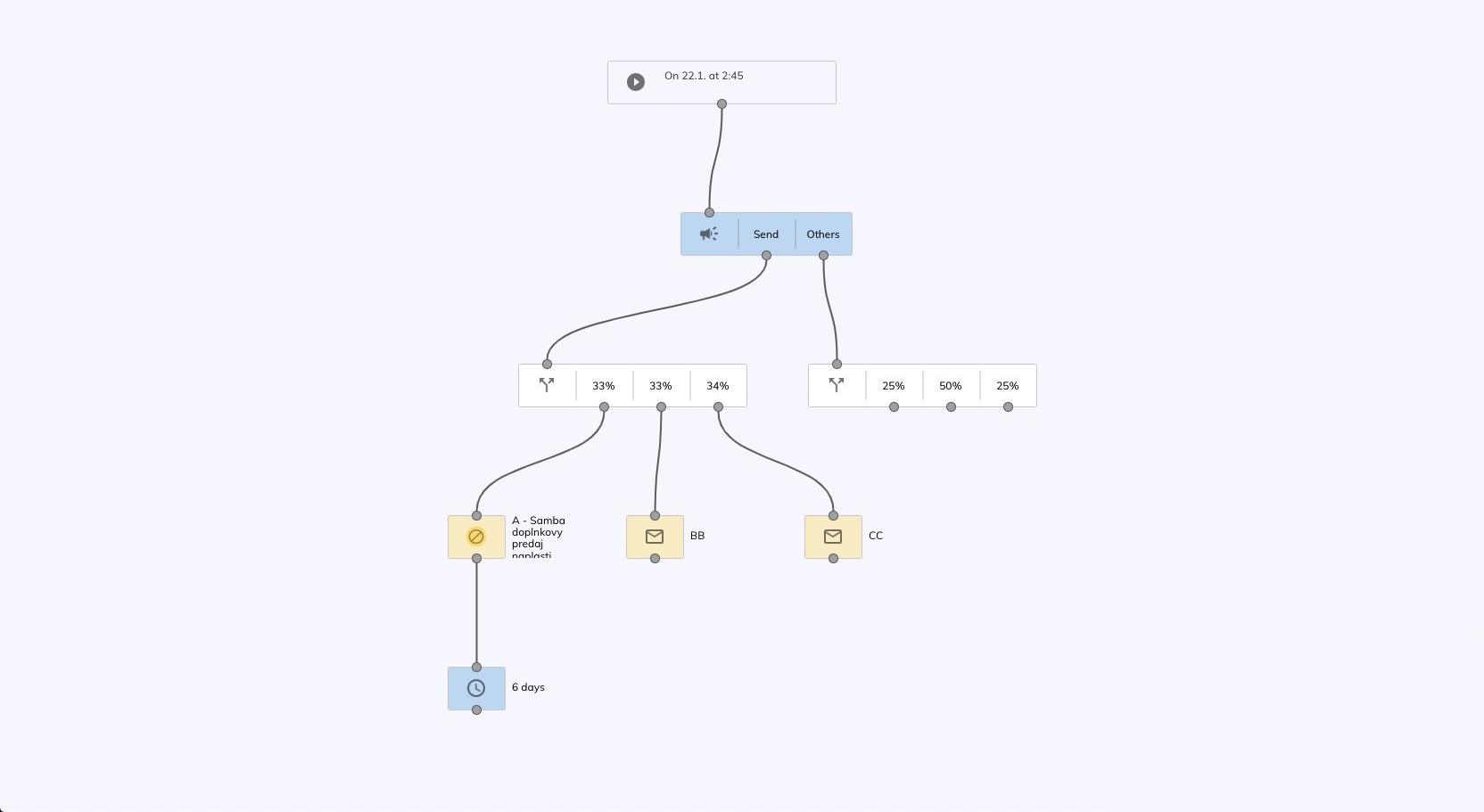 In samba.ai we believe that a great user experience is the key to success. With every release we make our omnichannel marketing tool easier to use even to marketers all around the world. Today we would like to introduce Viktor - our UX designer to you. Just this week Viktor introduced a new flow campaigns editor, so let’s have a short chat about it.

‍Why did you decide to change the interface?‍

Since the first version of this feature was introduced in 2018 (even before I joined the company) a lot has changed. We have expanded the possibilities within the interface and offered new ways to reach customers with personalized messages.
We were positively surprised by the extent of usage. Users were confident to create complex campaigns with rich segmentation logic and interdependencies to reach new levels of personalization.
On the other hand I admit that we were not prepared for this scale. In time we implemented a few improvements such as "connection info", we knew that the complete revamp is necessary  to strengthen the basic building blocks, though. Flow campaigns are a flagship feature for samba.ai for sure. Therefore we decided to approach the redesign as a full revamp. That way we made sure that every iteration means a significant improvement for the user.

‍What problems did you see with the interaction and how did you solve them?‍

There are a few I would like to talk about.

It quickly turned out that the scale of the campaigns outgrew what we thought was possible with the system, in a comfortable way. We celebrated that users accomplished more than we could imagine at the time of release. On the other hand we empathized with the pain of using the current interface. New infinite canvas created surplus of space and according to tests, unlimited real estate gave room for other feature enhancements to emerge.

Even though canvas is infinite, the attention resources are limited. I was looking for ways to replace the current verbose representation of the graph. In many cases understanding the campaign intentions meant excessive mouse movement to reveal details of a particular segment of a graph. This gradually caused irritation for our users.
The biggest challenge for us was to increase the density of information per pixel and enable passive consumption of clues that represent encapsulated logic behind a specific node of the graph. I was able to surface the settings of nodes, such as Segmentation, which in turn allowed the user to read a graph with less effort. This significantly reduced time for the finaů double check before activating the campaign and increased confidence in setup being correct.‍

Returning to the saved campaign to make alterations after a notable period of time, when context vanished from the user's memory meant putting effort into familiarizing with the structure again. To give users a tailwind we implemented colors to differentiate node types and Navigator in the screen corner as a miniature map of the movable canvas, that utilizes our natural abilities for spatial orientation. With these subtle improvements we removed friction and created more space for more complex representations.‍

What do you see as the biggest benefit of the new flow campaigns?‍

Nowadays bringing results in marketing is a matter of coordinated teamwork. Solution consultants have to align with a client or solution owners to agree on a campaign concept. Thought-out solutions have to respect not only the criteria and goals of the strategy but also constraints of the software.

First version of the feature supported structuring the chain of actions once the intention and steps are clear. Which involved trial and error of understanding what users can do and how to do it within the interface. At least from the beginning.

New version allows outlining chain of actions without specifying unnecessary details at the first stage of figuring out the essentials of the campaign conception. Especially useful for brainstorming or presentation purposes. Users can save unfinished graphs as a draft and come back once they get required inputs from others. Interface invites iteration and collaboration. Our hypothesis is that prototyping campaign ideas is now much easier. We are eager to follow up with our users on how this change impacted their work.‍

How do you see the future of flow campaigns?‍

There are still areas of the feature which most users didn't have a capacity to fully comprehend and we want to do a better job of providing an interface for their intuitive interpretation. Anything from execution settings through coupon expiraion problems to on-time prevention from errors. These are the use cases we know about thanks to our transparent and frequent communication with users.

Flow campaigns is a very versatile tool. Taming its high degree of flexibility demands a bit of systems thinking skill from the users. We are dedicated to support them by designing an interface that guides them through the jungle of options towards precision and scalability in personalized marketing.

Would you like to find out more about flow campaigns? See our previous articles and use their power to reach your customers with highly personalized messages through different channels to maximize your revenue and reach today!